The human body is composed of over forty trillion cells. Within each of these cells there is close to two meters of tightly packaged genomic DNA, the blueprint of life. Recently, there have been many advances in understanding how DNA is packaged and organized in the cell. In contrast, how DNA behaves mostly remains unknown.

In this recently published report, SOKENDAI graduate student Ryosuke Nagashima, assistant professor Kayo Hibino and professor Kazuhiro Maeshima of the National Institute of Genetics partnered with assistant professor S.S. Ashwin and professor Masaki Sasai of Nagoya University to study the movements of DNA in living cells using super resolution fluorescence microscopy (Figure 1A and B). Previously, it was commonly thought that the process of reading genomic information, known as transcription, would lead to more dynamic movements of DNA through the loosening of nucleosome packing. However, as Nagashima et al. report, transcription normally restricts DNA movement since the inhibition of transcription leads to increased DNA movements (Figure 1C). Furthermore, this work revealed that RNA polymerase II and other transcription-related factors form hubs to limit the motion of DNA (Figure 2). These results suggest that hubs may network the genome, restricting DNA movement to enable the efficient execution of transcription.

The results of this research have advanced our understanding as to how genetic information is acquired from DNA and may provide further clues concerning related disease states caused by abnormal changes to transcription.

Fig.1. (A) A small fraction of nucleosomes was fluorescently labeled (red). (B) A single-nucleosomes image of a living human cell. (C) Genomic DNA motion, which is shown as mean square displacement, MSD), increased upon transcription inhibition. 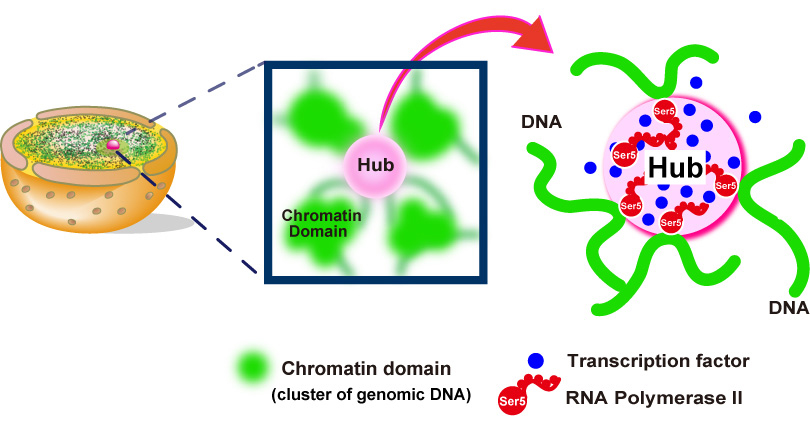