The formation of the pre-replicative complex (pre-RC) during the G1 phase, which is also called the licensing of DNA replication, is the initial and essential step of faithful DNA replication during the subsequent S phase. It is widely accepted that in the pre-RC, double-stranded DNA passes through the holes of two ring-shaped minichromosome maintenance (Mcm) 2–7 hexamers; however, the spatial organization of the DNA and proteins involved in the pre-RC formation is unclear.

A research group lead by Drs. Hiroyuki Araki and Kohji Hizume at NIG reconstituted pre-RC from purified DNA and proteins and visualized the complex using atomic force microscopy (AFM). Higher-resolution imaging of the pre-RC was performed by using FM-AFM in collaboration with the group of Professor Hirofumi Yamada at Kyoto University, and successfully detected two globules (two MCM hexamers) of the elliptical particle formed on DNA.

Analyses through AFM observation revealed that the DNA does not completely pass through both holes of the MCM hexamers, possibly because the DNA exited from the gap between Mcm2 and Mcm5. A DNA loop fastened by the MCM double hexamer was detected in pre-RC samples reconstituted from purified proteins as well as those purified from yeast cells. These results suggest that a higher-order architecture of the loaded MCM hexamers and DNA strands during licensing of DNA replication, which have not been proposed before. 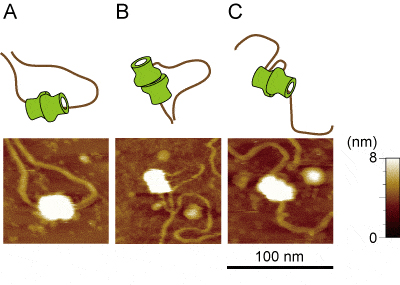