Pyrrole-Imidazole (PI) polyamides bind to the minor groove of DNA in a sequence-specific manner. Our previous studies have demonstrated that a synthesized tandem hairpin PI polyamide (TH59) can target human telomere sequences (TTAGGG)n under mild conditions and can serve as a new probe for studying human telomeres. In the recently published two papers, we have improved specificity of the tandem hairpin PI polyamide by optimization of the connecting region (hinge region) of the tandem hairpin parts [HPTH59-b in Fig. A and paper (i)] and by introducing additional hairpin part [TT59 in Fig. B and paper (ii)]. The HPTH59-b and TT59 have higher specificity to recognize human telomeric repeats than the previous ones and stain telomeres in chemically fixed human cells with lower background signal. 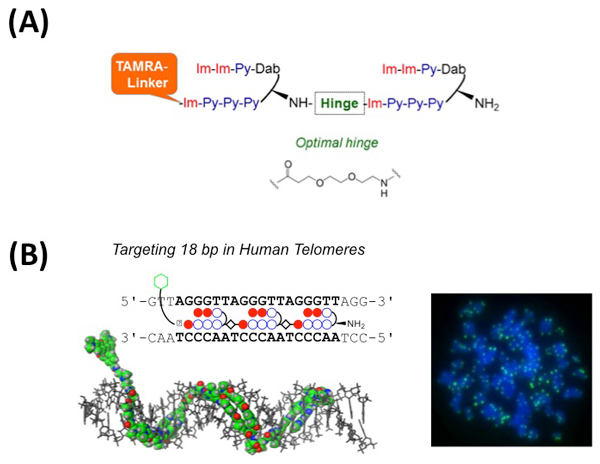 (A) Schematic structure of HPTH59-b. The optimized chemical structure of hinge segment is shown.
(B) Left, schematic representation of the tandem trimer PI polyamide TT59, which binds to 18bp of the human telomere sequence. Right, the telomere regions of chromosome ends are labeled with TT59 (green). DNA stain (blue).