Notwithstanding the importance of effective approaches to analyze social interaction between animals in experimental settings, the methods that are currently available to do this rely predominantly on human observation. This makes large-scale studies of social interaction behavior difficult.

In this paper, we report the development of freeware, called DuoMouse, that enables video recording to track the movements of two mice from a movie file, analysis of behavioral states using a hidden Markov model (HMM), and visualization of the results. We used this software to compare social behavior in consomic and subconsomic strains, and to map a genetic locus responsible for differences in social interaction between the strains. We report a locus that increases social interaction only in males and that lies within a 24.6-Mb region of chromosome 6.

We propose that the method applied in the present study is very efficient and useful for large-scale genetic and pharmacological studies of social behavior in mice. All of the software is open-source, and the source code will also be provided for further development by others. (http://www.nig.ac.jp/labs/MGRL/DuoMouse.html)

This research was supported by the Research Organization of Information and Systems, Transdisciplinary Research Integration Center, JSPS KAKENHI Grant Numbers 23650243 and 25116527, and NIG Cooperative Research Program (2010-A40, 2012-A85). 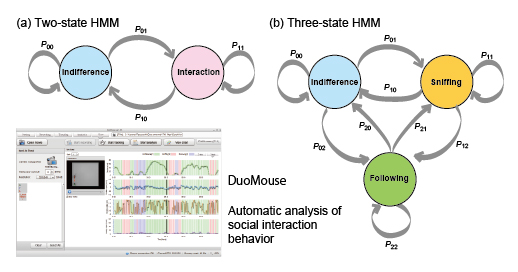 Diagram showing the Markov transition probabilities for the two-state HMM and three-state HMM. The image showing one of the pages of the freeware, DuoMouse.