A diverse group of researchers from around the world have united to demand a sensible international policy solution for “digital sequence information”. In a paper published on in the journal Nature Communications, 41 researchers argue for why a policy solution on digital sequence information (DSI) is urgently needed, and propose a policy framework that would support biodiversity conservation while also providing a realistic mechanism to better share the benefits of DSI research.

Urgent international action is needed to stem the ongoing destruction of our planet’s biodiversity, and the United Nations Convention on Biological Diversity (CBD) is one of the most important global instruments by which such action could be coordinated. Parties to the Convention are currently negotiating the Post-2020 Global Biodiversity Framework which will set the ambition and shape the actions of countries and stakeholders to protect our planet for the coming decades. Disagreements, however, have arisen among Parties to the CBD regarding how to treat (regulate?) data derived from sovereign genetic resources, known as “digital sequence information” or “DSI”. A solution to this issue must be found before an agreement can be reached on the Global Biodiversity Framework.

Scientists have a long history of sharing DSI openly in public databases on the web. This culture of sharing is central to modern biology and biodiversity research, and has helped drive technological advances in fields as diverse as medicine, food security, and green energy production. Public online databases currently contain sequence information for many hundreds of thousands of organisms and grow each day. They support scientific reproducibility, transparency, and advancement. Nonetheless, it is clear that the benefits that arise from this research are unequally distributed around the globe.

In the paper published at Nature Communications, the authors argue that the benefits of DSI can and must be distributed equitably in a way that supports the aims of the CBD without undermining the research community’s cherished culture of sharing. They propose a policy mechanism whereby researchers would continue to deposit and share their data through public online databases, but users of these databases, or high-income nations, would be obliged to contribute to an international fund, which would then distribute monies to countries around the world based on their development status and their contribution to the global DSI dataset, thereby incentivizing countries to generate DSI data on their biodiversity. The result would be a positive feedback loop that shares benefits and incentivizes biodiversity research, without disrupting scientific data sharing. They argue that such a policy mechanism must be “multilateral” to succeed: Nations around the world must cooperate and agree on common rules and that it should be “de-coupled” from access, meaning payments are not connected to viewing the data. The authors of this work also call on policy-makers to engage with researchers in their countries who depend on DSI, so that any policy solution will not hinder crucial biodiversity research.

The authors of this paper are members of the DSI Scientific Network, a group of scientists from different countries and economic settings that share convergent points of view in the DSI debate, and who are joining their voices to argue for sensible policies solutions on this crucial issue.

One of the authors, Mutsuaki Suzuki, Director of NIG INNOVATION at the National of NIG, also founder of ABS Support Team in the NBRP Information Development Program. He has also participated in the Conference of the Parties to the Convention on Biological Diversity as a Japanese government delegate for more than 10 years. 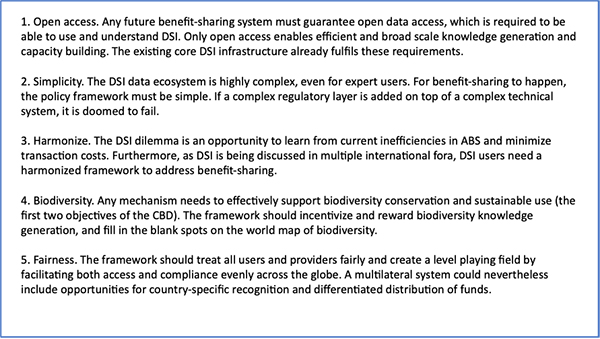