Mammalian sex depends on a male-specific gene, sex-determining region Y (SRY), which is located on the Y chromosome. Individuals lacking this gene will develop as female. Accordingly, germ cell fate also changes from male to female in the absence of SRY. Therefore, it is thought that somatic cells regulate germ cells to become sperm or oocytes. However, it is largely unknown what factor is responsible for sexual fate determination in germ cells. In fetal ovaries, retinoic acid (RA) initiates STRA8 expression in germ cells and induces meiosis. Female germ cells without STRA8 fail to enter meiosis but still progress to oogenesis and form oocyte-like cells, indicating that RA is not the regulator of oogenesis. Here, we found that female germ cells lacking both SMAD4 and STRA8 (but not a single knockout) develop as male gonocyte-like cells in ovaries, indicating that these two factors work as female germ cell determinants. To our surprise, the sexual fate switch observed in the double knockout ovary is not accompanied by gene expression changes in somatic cells, revealing the unexpected finding that somatic factors controlled by SRY are dispensable for the upregulation of male-specific genes in germ cells. This research is partly supported by Grant-in-Aid for Scientific Research on Innovative Areas ”Epigenome dynamics and regulation in germ cells” to YS. 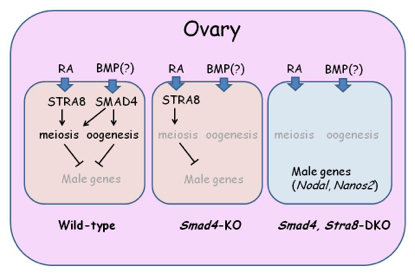 In the ovary, two pathways, RA-Stra8 and SMAD4 pathways play crucial roles. In the absence of SMAD4, germ cells fail to produce any oocytes but do not show any male character. Loss of SMAD4 and STRA8 leads to the upregulation of NANOS2 as well as other male-specific genes. 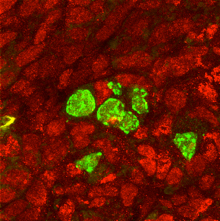