In this first article in the series “Our Leaders in Genetics,” we meet Professor Emeritus Tomoko OHTA, a world authority on population genetics. As a co-researcher of the late Prof. Moto’o Kimura, Dr. Ohta developed his neutral theory of molecular evolution and established her “nearly neutral theory.” Dr. Ohta’s research achievements are highly regarded the world over: she was the first Japanese woman scientist to be named Foreign Member by the American Academy of Arts and Sciences, and her honors within Japan include the inaugural Saruhashi Prize and the Japan Academy Prize. She worked at the NIG for 27 years from 1969 until her retirement in 1996.

Looking back on her work in population genetics 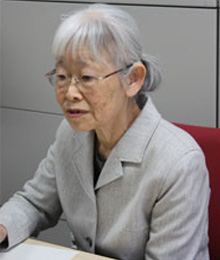 Gray-haired Dr. Ohta gave this interviewer a gentle and tranquil regard through her glasses. Talking about her research, she would take a pen and paper to illustrate her comments. In her words, population genetics is a “very theoretical” discipline which “examines the principles that explain diversity in a biological population.” Population genetics studies and hypothesizes, based on quantitative models, the process of biological evolution through which diverse life forms have come to exist on earth. Dr. Ohta has been analyzing and theorizing the evolution and variation of mutant genes using statistical methods.

Among evolution theories, Darwin’s natural selection theory has been much supported for its thesis that mutations beneficial to survival are more likely maintained since they have a better chance of leaving progeny. In 1968, Motoo Kimura published his “neutral theory of molecular evolution,” which attracted great attention as revolutionary. It states that neutral mutations that are neither advantageous nor deleterious have played a major role in evolution.

“In the late 1960s, there was a trend of uniting biochemical data and population genetic theories, and I attentively observed this trend. Then I focused on mutations that have weak effects due to functional constraints in protein evolution. The nearly neutral theory came out as a result of combining data with theories of population genetics.” The nearly neutral theory of molecular evolution postulates that mutations that are nearly neutral, that is, neither deleterious nor completely neutral, play a key part in the process of evolution. Following remarkable advances in genome biology in the 21st century, data have been successively published to support the nearly neutral theory. Back in those days, however, Dr. Ohta had great difficulty getting the research community’s attention to her theory because of the strong support for the natural selection theory. “At the NIG, on the other hand, I had many researchers’ understanding. The research environment was also very good. I really feel that working here at the NIG was the right thing for me.

Research at the NIG 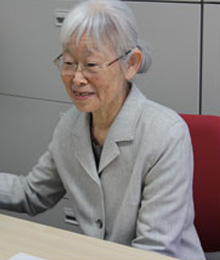 Dr. Ohta first arrived at the NIG in the spring of 1967, as a researcher associated with the Japan Society of the Promotion of Science. She had studied population genetics in the United States and came to the NIG upon returning to Japan, hoping to continue research in Dr. Kimura’s laboratory. “In the beginning, it was as if I had been accepted only for the time being. With my Ph. D. from the US, I was self-confident at first, but as soon as I started working under Dr. Kimura, my self-confidence quickly disappeared.” Two years later, she was officially hired as a researcher, having demonstrated her abilities. “Dr. Kimura was known as a terribly strict scientist, but for me he was not at all that way. He was very straightforward, and I was able to be open and frank with him. I think this open and frank relationship was very beneficial for my research. We argued every day, if not quarreled. Those arguments with him taught me so much.

“Making numerous great achievements, Dr. Ohta received the inaugural Saruhashi Prize presented to outstanding women scientists. Dr. Ohta says that her gender has never posed problems as a researcher. “It wasn’t easy when my child got sick, for example. But besides that, there was no problem since I was able to adjust my own research schedule.” Doing housework was, says she, a great way to unwind after hard work.

At present, she is most interested in the regulation of gene expression. She comes to the NIG every day to continue her research. “Reading papers, I notice positive developments related to the nearly neutral theory. This gives me great pleasure,” says Dr. Ohta. Her mind seems filled with research and related matters. In her free time she reads science fiction and novels. She also enjoys walking and listening to music, “although you can’t really call them hobbies.” Dr. Ohta smiled modestly.

Commemorating the 60th anniversary of the NIG, Dr. Ohta sends the following message to future researchers who wish to enter in the same area of specialization: “Genetics is now at a very interesting stage. There are so many interesting questions unanswered and so many ways to test to find answers. Intuition is very important in addressing questions. Nurture your own sensibility and pursue your research and work with confidence.”

The Interviewer’s postscript: Dr. Ohta modestly repeated that she had been simply lucky in her career. She almost appeared detached when she talked about her research. Yet, I could feel in her quiet words her unstoppable passion for research. This encounter with Dr. Ohta deeply touched me. She shared with me something precious. Thank you very much.