Sexual reproduction is widespread in eukaryotes. However, only asexual reproduction has been observed in unicellular red algae, including Galdieria, which branched early in Archaeplastida. Galdieria possesses a small genome; it is polyextremophile, grows either photoautotrophically, mixotrophically, or heterotrophically and is being developed as an industrial source of vitamins and pigments because of its high biomass productivity. Here, we show that Galdieria exhibits a sexual life cycle, alternating between cell-walled diploid and cell wall-less haploid and that both phases can proliferate asexually. The haploid can move over surfaces and undergo self-diploidization or generate heterozygous diploids through mating. Further, we have prepared the whole genome and comparative transcriptome dataset between the diploid and haploid and developed genetic tools for the stable gene expression, gene disruption and selectable marker recycling system using the cell wall-less haploid. The BELL/KNOX and MADS-box transcription factors, which function in haploid-diploid transition and development in plants, are specifically expressed in the haploid and diploid, respectively, and are involved in the haploid-diploid transition in Galdieria, providing information on the missing link of the sexual life cycle evolution in Archaeplastida. Four actin genes are differently involved in motility of the haploid and cytokinesis in the diploid both of which are myosin-independent and likely reflect ancestral roles of actin. We have also generated photosynthesis-deficient mutants such as blue-colored cells, which were depleted in chlorophyll and carotenoids, for industrial pigment production. These features of Galdieria facilitate understanding the evolution of algae and plants and the industrial use of microalgae.

A review by Professor Ursula Goodenough (Washington University in St. Louis) about this article will be published in this journal (PNAS) at a later day. 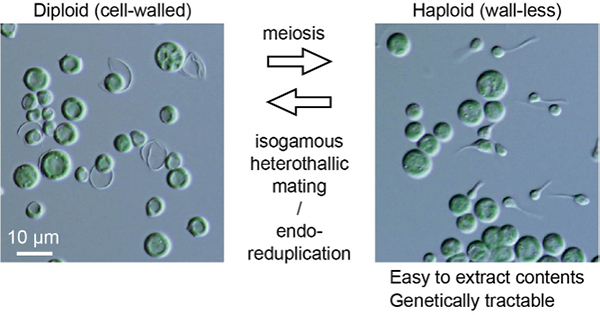 Figure: This study revealed that the cell-walled form of Galdieria, previously known as the only form, is diploid. A diploid undergoes meiosis in response to pH drop and generates a cell wall-less haploid which also can proliferate asexually (by cell division). Haploids undergo isogamous sexual reproduction or endoreduplication, generating heterozygous or homozygous diploids, respectively.