A protein maintaining plastid and mitochondrial genome integrity in plants

as a mitochondrial DNA (mtDNA) HJ resolvase in yeasts, homologs or other mitochondrial HJ resolvases have not been identified in other eukaryotes. Here, we demonstrated that MOC1 depletion in the green alga Chlamydomonas reinhardtii and the moss Physcomitrella patens induced ectopic recombination between short dispersed repeats (SDRs) in ptDNA. In addition, MOC1 depletion disorganized thylakoid membranes in plastids. In some land plant lineages, such as the moss P. patens, a liverwort and a fern, MOC1 dually targeted to plastids and mitochondria. Moreover, mitochondrial targeting of MOC1 was also predicted in charophyte algae and some land plant species. Besides causing instability of ptDNA, MOC1 depletion in P. patens induced SDR-mediated ectopic recombination in mtDNA and disorganized cristae in mitochondria. Similar phenotypes in plastids and mitochondria were previously observed in mutants of plastid-targeted (RECA2) and mitochondrion-targeted (RECA1) recombinases, respectively. These results suggest that MOC1 functions in the double-strand break repair in which a recombinase generates HJs and MOC1 resolves HJs in mitochondria of some lineages of algae and plants in addition to plastids in algae and plants. 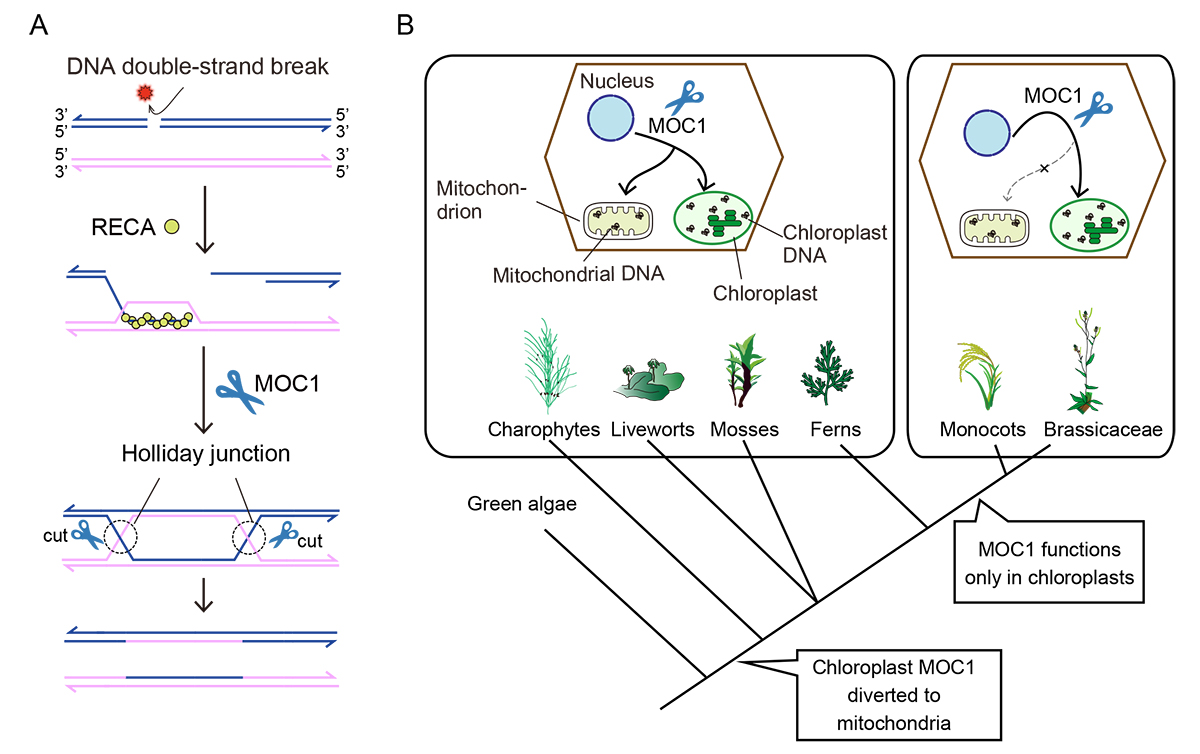 Figure: (A) Schematic diagram of double strand break repair that is mediated by a recombinase RECA and a Holliday junction resolvase MOC1.
(B) Evolutionary transition of MOC1-mediated organelle DNA maintenance in plants.